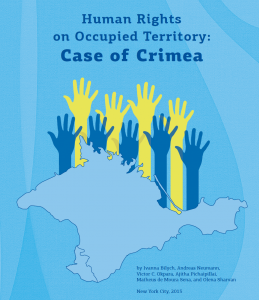 This report was prepared under the auspices of Razom, Inc., in collaboration with NYU School of Law LLM program (including Matheus de Moura Sena, VOLYA Institute’s Co-Founder and Board Member). In June 2015, the legal group of Razom, led by attorney Ivanna Bilych (Co-Founder and President of VOLYA Institute), presented the first edition of the report in Ukraine (June 15-19 in Lviv and Kyiv) and Europe (June 21-25 in Strasbourg, Brussels and Antwerp), eliciting feedback and distributing the report to Crimeans, Ukrainian civil society organizations, representatives of the Ukrainian government, as well as members of the European Parliament and the Council of Europe. In November 2015, Ivanna Bilych and Bohdan Pechenyak, both former Razom Board members, were joined by three other Co-Founders in launching VOLYA Institute for Contemporary Law and Society and releasing the second edition of the report in cooperation with Razom.

Human Rights in Occupied Territory: Case of Crimea analyzes economic, social and cultural rights of Crimeans, and examines their systemic violations within the current context of occupation.  Based on the analysis, the document provides a comprehensive list of recommendations for addressing the situation. The recommendations are addressed to the governments of Ukraine and the Russian Federation, as well as the international community and civil society actors.

A crucial part of report is a Human Rights Protection Guide (“the Manual”). The people in Crimea are economically deprived and legally undeserved, often knowing little about their rights and being unable to demand their application. The Manual provide Crimeans of all ethnic and religious backgrounds with access to justice by explaining their fundamental rights. It lists fundamental rights that apply to Crimea, according to international human rights treaties, as well as pursuant to the articles of the Constitutions of Ukraine and the Russian Federation. The Manual also includes a directory of Ukrainian and international human rights protection organizations and advocacy groups, so that Crimeans know where to report violations and seek advice or explanation.

Both editions of the report, including exhaustive citations and the Manual, are available for download below.

In addition, Manual has been translated into various languages, and is available for download below: