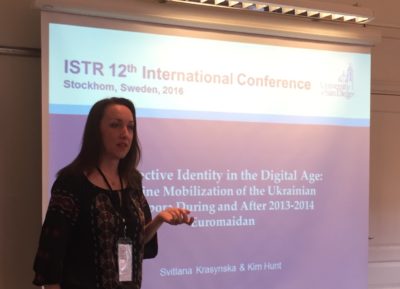 Our Vice President, Svitlana Krasynska, together with her colleague, Kim Hunt (University of San Diego), conducted a study on social media participation by the Ukrainian diaspora, especially how this participation has changed since the events of 2013-14 Maidan, and the role of Ukrainian identity in their activism. The study involved an online survey of over 800 individuals who identified as Ukrainian but resided outside of Ukraine across the globe.

The study’s findings provide a deeper understanding of Ukrainian diaspora’s collective online efforts in support of Ukraine, and how these efforts might be maintained and enhanced overtime. The findings of this study will be reported through various academic and popular media publications that are currently in development. However, here is a quick glimpse into some of the survey results. Over two-thirds of the survey respondents were born and raised in Ukraine and over half have retained their Ukrainian citizenship (with most residing in North America and Western Europe at the time of the study). Almost all of those polled felt they identified more with Ukraine than with any other country, and most considered themselves part of the Ukrainian diaspora. Respondents also reported that after the events of Euromaidan, they felt a closer connection to their Ukrainian heritage. Most of the respondents reported that social media enabled their participation in Euromaidan in various ways. Ukrainian identity and a sense of justice were the top two reasons given by the respondents for participating in the events of Euromaidan. The majority of individuals polled felt that social media has become an important element for making connections to other Ukrainian individuals and groups.